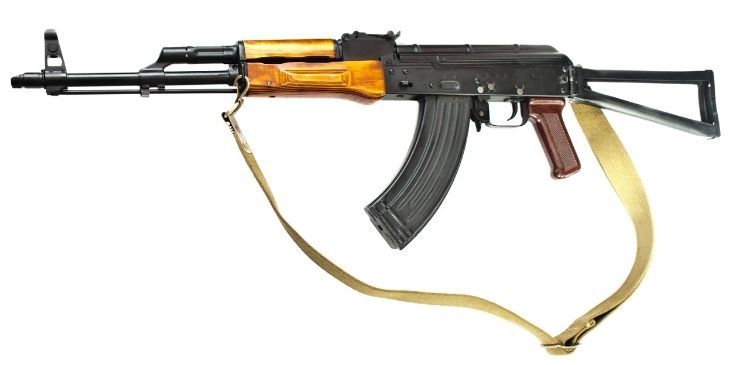 Today, we’re going to be looking at one of the most popular firearms designs in history, the AK 47. We do this in an attempt to answer the question of its popularity. Now, almost eighty years after its first design, the AK-47 and its variants and descendants are popular firearms with militaries, law enforcement, and even civilians on a global scale. It’s hard to find an adult human being who cannot recognize the iconic AK pattern of firearm at a glance.

To figure out the popularity of this firearm, we’ll go back a little bit into firearms history. We’ll also look at its current adoption and production. Then we’ll talk about the performance of this iconic piece of firearms history.

A Brief History of the AK Platform

As the name implies, the AK47 was first adopted in 1947. The Soviets, learning from the experience of the Second World War, thought that mobile firepower was the future. But they found that the pistol-caliber submachine guns were not adequate for long-range combat. While not as modular as the AR-15 at the time they were created, modern variants can easily accept red dot sights and other accessories. Similarly, semi-automatic rifles such as the SKS or the SVT 40 did not have the suppressive capabilities sometimes needed in close urban engagements.

Thus, the AK-47 took advantage of a relatively small rifle cartridge and box magazines. That meant it sat somewhere between a submachine gun and a rifle in terms of power and rate of fire. The Germans had come up with this concept a few years prior in the SGT 44. However, the AK47 was the first true assault rifle that was built and issued to front-line infantry troops in significant numbers.

As good as the AK design was, it has undergone a major overhaul in the years since 1947. Specifically, in light of the development and use of the M16 in 5.56mm NATO. The Soviets learned about from afar in Vietnam. They developed their own variant of this smaller, lighter cartridge, the 5.45mm. In 1974 re-vamped the AK into this caliber, creating the AK74 variant.

Today, most of the European AKs you see in the hands of front line troops will be AK74s. Although, at a distance, most people cannot readily distinguish one from another. There are also still untold millions of AK47 pattern rifles out there. Some are even being produced new today in places as far-flung as North Korea and Florida.

In terms of measuring the popularity of any item, we’d like to have some idea of the total numbers of the thing produced. With the AK47, this presents some level of difficulty. First and foremost, a lot of countries produce the AK, or at least something AK-like. There is, however, even some controversy as to what counts.

The Israeli-made Galil, for instance, sure looks and functions a lot like an AK, but differs in design a little bit. The same can be said of the Sig 550, though that is a little less like an AK-47. Good ideas and good designs spread, and that is certainly true of the AK.

The other major issue here is that a lot of AK production occurs in places not exactly known for their transparency. In countries such as Russia, China, and North Korea. All of which have adopted the AK47 at some point or another. Getting estimates from any of those countries for AK production is likely going to be a rough estimate. It would be based largely on lies and propaganda.

This problem is further compounded when you take into account the numbers of AKs that have been donated to nonstate actors over the years. There are millions of weapons on the planet that are unaccounted for various reasons.

For instance, is it terribly likely the Soviet records of AK shipments to North Vietnam still exist and are open to the public? Probably not, and we’re not sure if we would trust them if we could read them ourselves.

Venturing something of a wild, ballpark estimate, then, we expect that there are likely several hundred million AK variants in operational condition, or have been produced, since 1947.

Countries That Have Adopted the AK Platform

There are a myriad of countries that use the AK or its variants as its main combat weapon. You can find them all over the world. Of course, the major countries with massive militaries here are Russia, China, North Korea, and, to a lesser extent, Cuba. However, they are by no means the only ones making use of the AK.

India, Pakistan, as well as nearly the entire continent of Africa, makes use of the AK as one of its main small arms. This makes the AK47, as far as we know, the most widely adopted small arm in history. The closest historical parallel here is like the Mauser 1898 model. This was popularly sold to both sides of WWI, and copied by many others.

Of course, this does not take into account the civilian and nonstate actors who use the AK47. If you take those into account, it is likely that you can find an AK47 in someone’s hands in every nation-state on the planet.

Here in the US, there are some major misconceptions about the performance of the AK. A lot of Americans considering the AK to be inaccurate. We think this comes from two sources. First is that propaganda works both ways. Seeing the Soviets as the bad guy makes it a lot easier to discount their weapons. Even if those weapons systems are well made. Second is a difference in doctrine and zeroing your scope:

Soviet AK doctrine had soldiers zero their rifles at the belt buckle of a target so that, at 50 meters, all the soldier had to do to get a lethal shot was line up the front sight post with the waistline. If you didn’t know this and were handed an AK, you mighty well aim for the center of the target and hit two feet high. In reality, the AK is about a 3-4 gun from the factory, which is comparable to most infantry rifles of the 20th century.

In short, the AK-47 is popular because there are several hundred million of them that have been made. Those who use them often come to love the AK over time. Being relatively accurate and widely available, we’ll likely see these as main infantry rifles for several more decades at the very least.

What Is The Best Pistol Cleaning Kit?

Previous Post What Are the Most Durable AR-15 Scopes? Next Post Best Features of Holosun Red Dot Sights