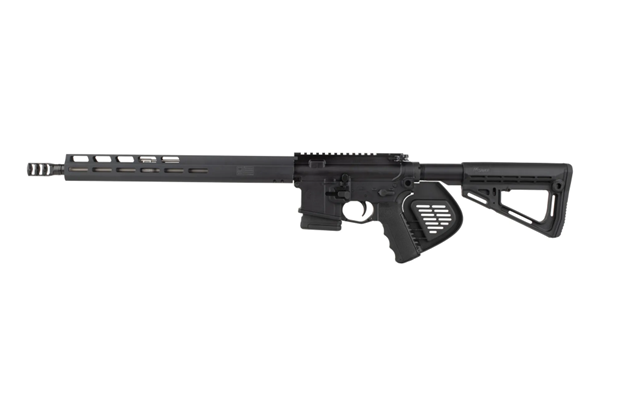 Many firearms enthusiasts living in the U.S. already know that the 16” AR barrel is the shortest length that you can own without having to register the rifle through the NFA, with few exceptions. However, many people aren’t familiar with a bullet button or what constitutes the best AR-15 bullet buttons and its intended purpose.

This is certainly a good thing that many people aren’t familiar with these devices, because it means they live in a place where they are more free to exercise their right to bear arms.

Still, any AR15 owner in nine certain states certainly does know what a bullet button is, unfortunately, and they know a well-manufactured and dependable bullet button guarantees a better trip to the range.

While the litigation and laws go back and forth over magazine capacity restrictions, every day, a host of AR15 rifle owners in states with restricted magazine laws are able to use the bullet button to throw plenty of lead down range and ditch those standard capacity magazines that might land them in hot water with authorities.

If you’re an AR15 owner living in one of these, you likely understand what they are.

Regardless of the intent of these restrictions, the result often eliminates one of the most exciting parts of firing an AR15: quick reloading and continuous firing at the target.

These restrictions also created a significant drawback for many AR15 manufacturing companies as they tried to meet the fixed magazine laws by welding the magazines to the upper receiver.

This results in an AR15 that isn’t fun to shoot and is difficult to justify taking to the range, when you’re spending valuable time reloading. So much so that many fans saw these fixed magazine iterations to be an almost useless firearm, which was probably the idea behind the law.

It wasn’t until 2005 that the “fixed magazine” was addressed with the advent of the Prince50 Magazine Lock, which fixed the magazine in place without the need to weld it to the upper receiver.

With the Prince50, many AR15 enthusiasts could purchase a fully featured AR15, perform the necessary stock and grip modifications and lock the magazine in place to make it completely compliant.

Although states such as California have restricted the use of bullet buttons in 2016, many AR15 enthusiasts who fitted the lower receiver with a bullet button before inaction of the ban were allowed to grandfather their rifle build.

Keep in mind that the restrictions stated that the AR15 magazines remain fixed in the magazine well of the gun and require a specialized tool to remove the magazine and reload.

When using a bullet button, the operative words are “a tool,” and using the tip of one of your ammunition rounds to depress the recessed button next to the magazine well is, in essence, using a tool.

The advent of a bullet button brought the AR15 passion back in many of these restricted states. It allows AR15 fans in areas requiring a “compliant,” featureless rifle to fire more rounds of ammunition quickly.
A much-needed feature that’s far better than opening the receiver, much like you do during a cleaning session and loading one or ten rounds at a time.

If you’re new to the thrilling world of AR15 rifles and live in a state with specific magazine capacity and loading restrictions, you’ve probably deduced you need a bullet button and may not know the best one to purchase.

Here are a few suggestions to consider.

When looking for the best bullet button for your rifle, it makes perfect sense to begin your search with one of the top bullet button producers on the market today.

Bullet-Button® has been helping the firearm community maintain compliance with their firearms for almost a decade and offers one of the better operating AR15 bullet button kits for the AR-15 and AR-10 platform rifles.

The Bullet-Button® is compatible for installation on all AR15 or AR10 rifles that have a stock AR mag release at a competitive price of fewer than fifteen dollars.

As the name implies, the magazine release is depressed with the tip of your .223 or 5.56 ammunition as the tool necessary to release the magazine.

The Bullet-Button® is anodized against corrosive damage and formed of high-grade billet aluminum. Making it a tried-and-true performer over a longer period of time.

For the better part of fourteen years, Thordsen Customs has provided the firearm community with the best compliant firearm accessories and innovations.

Priced at just under twenty dollars, Thordsen Customs offers the bullet button that became the gold standard for all bullet buttons, the Prince Bullet-Button.

This bullet button kit is compatible with all iterations of the AR15 and AR10 platforms and replaces the existing standard magazine release to make it fully compliant.

One attractive feature about this Thordsen Customs Prince Bullet Button is that Thordsen builds their UBBT kits, magazine enhancements, and magazines to pair perfectly, ensuring smooth and effective functional operation.

Moving up in the price range at around forty-five dollars, Patriot Pin features a compliant mechanism you may want to install regardless of whether a restriction law exists in your state or not.

This kit from Patriot Pin comes with a reverse spring that helps automatically eject the magazine once the upper receiver gets lifted.

With a specialized spring-loaded and lockable takedown pin such as the Patriot Pin 2.0 or Delta pin, you can release the pin and raise the upper receiver, which ejects the existing magazine.

After that, you can insert a fully loaded magazine and close and lock the upper receiver down and be ready to fire again in under five seconds.

Patriot Pin includes a Delrin roller pin with the AR Maglock Fixed Magazine kit to ensure a much longer lifespan of the upper receiver hinge to ease the wear and tear and keep your AR15 in action.

The AR-15 Maglock Gen3 Auto Releasing conversion kit effectively satisfies all of the compliance restrictions you may need to meet.

Still, it gives you a clean and quick way to enjoy the thrilling experience of firing multiple rounds in succession at your range target without all the frustratingly long loading delays.

Although this last entry isn’t so much a bullet button as it is the “tool” to use with an installed bullet button, how it works and its appearance when applied to your bullet button gives your AR pleasing esthetics while offering dependable functionality.

Not only is the Mag Magnet pressure fitted to make sure it stays in place, but its anodized 6061 aerospace-grade aluminum manufacture helps maintain many years of corrosion-resistant use on your AR15.

When magnetically attached to the existing bullet button of your AR15, the Mag Magnet acts as the depression point that releases your spent fixed magazine and allows a far quicker reload of a fresh one.

Although intended to be removable, when necessary, the power of the magnets to keep the Mag Magnet in place is awe-inspiring.

Many users of the Mag Magnet have reported that once in place, the only way to remove it is to pry it off gently. Another great feature of the Mag Magnet is that it typically doesn’t require any modifications to your existing bullet button before use. Just put it in place, and you’re ready to go.

Because it’s so easy to apply and requires little, if any, installation processes, many users of the Mag Magnet often forget to remove it.

However, you need to note something when using the Mag Magnet in an area with restrictions requiring a fixed magazine or capacity of ten or fewer rounds of ammunition. Never leave the Mag Magnet in place on your bullet button in such situations.

Forgetting to remove the Mag Magnet in a state with these restrictions could result in an illegal assault weapon situation.

The Mag Magnet has gained a considerable following from AR15 owners who travel frequently.
When operating your rifle in a state without restrictions, attach your Mag Magnet, which allows it to activate the bullet button and perform just as effectively for ten-round magazines as it will for larger capacity mags.

Conversely, when attending a competition in a state with the requirement of a fixed magazine, leave the Mag Magnet in your gear and keep one of your rounds of ammunition in your pocket.

Using a bullet button should not be considered a method to skirt the law. It’s a method of maintaining compliancy with the law. If you have any concerns about modifying your rifle you may just opt for a state compliant rifle that already has a bullet button and other features like the one below.

If the restrictions state that you need to use a tool to eject your magazine, using a bullet button that quickly ejects the cartridge when depressed with the tip of a bullet meets those requirements.

When it comes to having fun and keeping your AR15 above board, tools such as the Prince50 magazine lock and some type of bullet button or mechanism such as the AR MAGLOCK Fixed Magazine Conversion kit and ten round magazines are some of the best AR-15 Bullet Buttons