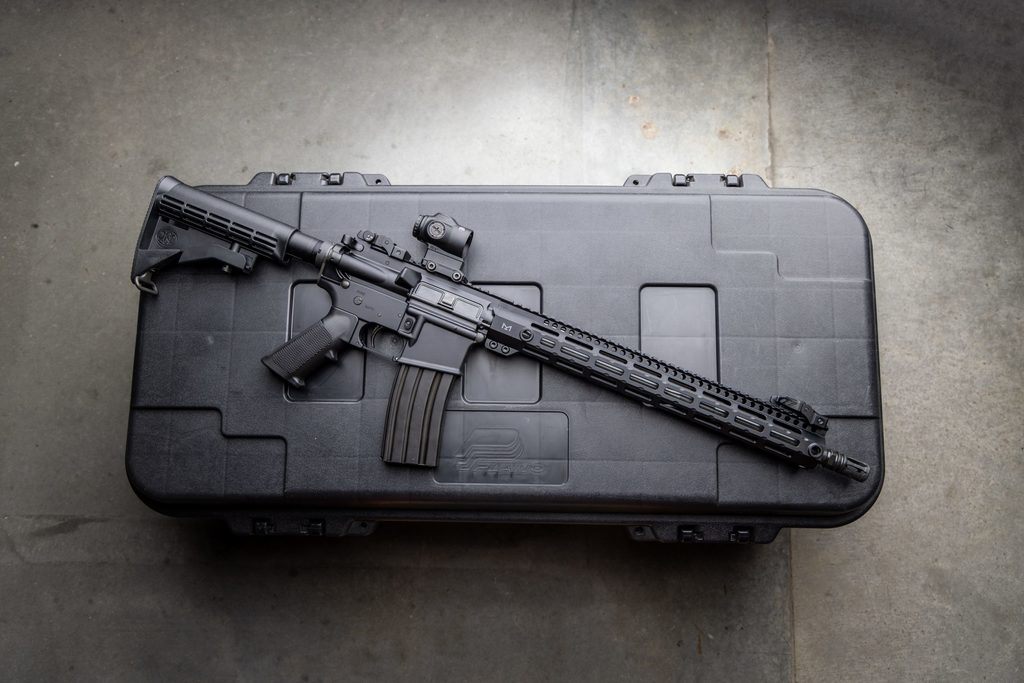 What's Ahead? hide
1. Innovative? Or the new standard? The Speed Tac Bolt Carrier Upgrade
2. Wait, nobody thought of this before now?
3. What’s the big deal with the Speed Tac Bolt?
4. What Is The Speed Tac Made Out Of?
5. Is this bolt carrier for the AR-15 a practical consideration for a lot of users?
6. Is this a lifesaving component part?
7. Will other manufacturers follow suit?

Often, the biggest game changing piece for your AR-15 is an upper receiver conversion kit that is properly mated to a specific use case that you may have with your rifle.

An instant transformation from one caliber to the next, or the quickest way to amp up range, or ballistic terminality or accuracy – this is the game changing type of add-on that we’ve come to expect in the AR-15 realm.

This article is about a much more subtle piece of componentry, that can have great positive impact, but offers much less wow factor, until you need its main service proposition. Let’s talk about the bolt that makes it much easier to seat a completely full magazine with a closed bolt.

Game changing in a sense, but with a lot less fanfare for sure. Can Speed-Tac’s new piece of hardware help you achieve more with your AR?

The Speed-Tac Bolt Carrier is an 8620 bolt that offers a relief groove that makes seating a full magazine into your AR-15 much easier with a closed bolt. It’s cool, no question.

Considering it hasn’t been done before, the new Speed Tac Bolt Carrier offers something interesting. And considering it’s an easy upgrade in the machine shop for a relative pittance in manufacturing costs, it’s likely that other manufacturers are going to implement a similar workaround at some point in the future.

It’s very likely to be the new standard for bolts, because why wouldn’t you?

The problem with this “technology” is that most high-end bolts didn’t previously feel it was necessary to include it, but once you use one, you realize it’s an important feature to have. So, even if there are patent concerns, other manufacturers are going to face some scrutiny by those who become familiar with the idea.

And word travels fast in the gun community when people feel they aren’t getting their money’s worth but are still expected to shell out high prices for components.

Wait, nobody thought of this before now?

And that’s part of the bigger problem with the industry – how is it possible that no one has addressed this issue before now? It’s hard to reload a full mag into the AR when it’s got a closed bolt position. But so many fast-action scenarios will call for just such a mag transplant on occasion.

Where it makes the most sense is in military and law enforcement situations where CQB is a real possibility, and where these rifles and carbines are seeing so much use. To not reliably seat a magazine, while under fire, or at least under immense stress is a game changing event. To the negative, of course.

Your muscle memory and training might allow you to easily remember to rack the charging handle, but if you haven’t seated the mag fully, you’re going to be in a world of hurt at some point.

This is true even of home defense situations where it’s dark, and you are likely to be less experienced than law enforcement or military personnel in the CQB scenarios. If you don’t seat a mag properly, from cold gun to engagement, or worse – from second magazine to re-engagement, you are going to be in for some trouble.

Don’t let the fact that 60 rounds of ammunition is a payload very unlikely in most home defense situations, deter this thought process, because crazier things have happened.

The Speed Tac Bolt Carrier solves that problem – even if you didn’t realize it’s a problem. And that’s the worst type of problem to have – the one you didn’t know about – when it comes time to engage a threat. So, solving it is a good thing.

What’s the big deal with the Speed Tac Bolt?

There are enough issues with ammunition and magazines independently, that adding to the problem by not being able to seat the new mag fully after a mag dump, is a realistic concern for long firefight engagements.

Your hands and mind do odd things when under extreme stress, like in an active shooting situation, for example.

The simple lengthwise groove that adds a relief in the underside of the bolt carrier prevents this improper mag seating from happening. And just like that, you don’t have to worry about a mag dropping out if you are going from closed bolt to engagement in a quick response situation.

While this author hasn’t seen the actual patent that Speed Tac has, it’s interesting enough a concept that there will be some exploration of the concept by many different facets of the industry.

What Is The Speed Tac Made Out Of?

Let’s be clear here though: Most shooters are hyper aware and hyper committed to their chosen bolt/bolt carrier makeup. This is an 8620 bolt carrier. That means it already has someone, in some forum making fun of the material selection because it’s not 158 Carpenter or 9310 steel.

Steel alloy 8620 must be through-hardened which means it doesn’t have as much potential for internal malleability that a Carpenter 158 Bolt carrier does.

That basically means it’s potentially more likely to break under certain conditions faster than the Carpenter 158 carrier, as it is seemingly more brittle, and less able to handle flex and the repeated need for absorption of shock.

It’s also marketed by a company that is tiny. Innovative, but tiny. And marketing dollars speak volumes when it comes to controlling the market’s attention. Guerrilla marketing will only carry you so far, if you cannot deliver on product needs, or customer service.

Many small companies in the AR-15 space are fighting off bankruptcy left and right until they get enough of a following to be somewhat insulated to market pricing whims and service issues.

Is this bolt carrier for the AR-15 a practical consideration for a lot of users?

Outside of these two groups, it’s hard to imagine that most experienced shooters are going to have a problem.

Is this a lifesaving component part?

It certainly could be, but that may be a bit overdramatic. If you are engaging threats that require this type of long-term sustained shooting, your training may already have methods to counteract these concerns.

That isn’t to say that it couldn’t be a life-saving addition, especially considering the law enforcement and special forces groups that would likely explore the concept, realistically.

Anyone who is talking like there is many professional rifle users that are dying because they didn’t seat their magazine properly probably isn’t getting accurate data or is making inferences on available data that are unlikely to be intellectually honest.

So, it’s probably not as big an innovation on the life-saving front as it is on the quality-of-life aspects.

Other manufacturers will follow suit. Probably a large company will buy out the small operation that has a single product for sale (Speed-Tac) or license the “technology”. The patent is the most interesting piece in the mix if you look at the mainstream market.

But there are other ways to achieve this solution, too. How rock-solid that patent is, may be the icing on the cake for a larger player looking at an acquisition of the company producing this cool new piece of AR kit.

The idea that an AR innovation has occurred in a market that wasn’t pushing for the specific innovation, is great news. The idea that a company can solve a problem after 50+ years of the rifle being on the market means something.

It means that the upward trend for the AR is very likely not going to be flattening out any time soon. For that reason alone, the Speed Tac bolt carrier is a game changer.