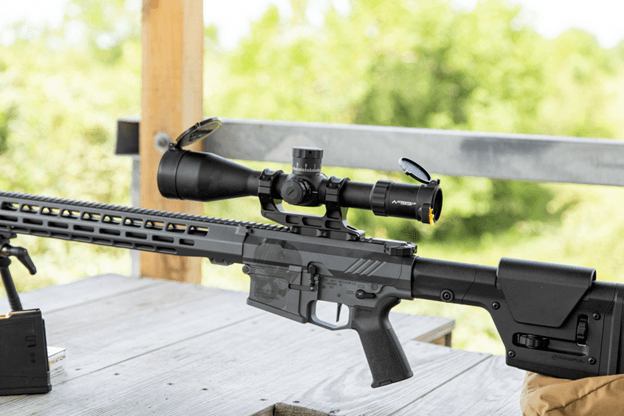 Using the AR-15 to build a practical varmint gun just makes sense. With the plethora of manufacturers jumping on the AR-15 bandwagon over the past decade or more, finding things like AR15 lower receiver conversions that can put you into an elite tier as a varmint hunter is very easy.

So, what do you need to do to build a practical varmint gun on the AR, without negatively affecting your bank account, or taking out a loan on your home?

Speaking strictly of the AR-15, which incidentally removes the 6.5 Creedmoor from the mix, there are some great options, including just the standard 5.56×45 or .223 Remington. But that’s not the whole story.

The following article will take a high-level view of the different components and concepts around the idea of building a premium varmint gun that can still be called practical.

As alluded to earlier, the AR-15 in a standard caliber can make a lot of sense for most varmint guns. In fact, that inexpensive but still pretty good cartridge option is why it’s had such a great adoption throughout the ranks of those who want to enter the field of varmint hunting.

What you’ll have to understand if you don’t already, is that the AR-15 shooting standard off-the-shelf 5.56 or .223 ammunition is going to get you out to about 400 yards on the extreme end. As a general point, a stock AR in this cartridge is a much better gun at between 200 and 275 yards, as it relates to extreme accuracy.

And even then, if you’re comparing to one-off “Prestige Style” builds, “extreme accuracy” isn’t the best way to explain a standard AR-15 with standard off-the-shelf cartridges.

Sure, the caliber, owing mostly to the light grain weight and the decent velocities that can be achieved with cheap ammunition, is going to go a long way towards pushing you into the varmint class. But the “X-Factor” is really the concept of modularity that comes with every AR-15.

With the right optic and a couple of strategically placed accessories, a decent barrel that has a twist rate that syncs up nicely with your chosen cartridge, and a bit of in-the-field experience will put you squarely in the arena you’d probably like to be playing in, from a varmint perspective.

What’s more than that: a standard AR-15 with the right set up is easily able to push you into large game territory if you factor in the right loads. So, a standard AR isn’t such a bad thing when it comes to crossover and keeping costs lighter.

Going beyond the standard set up, one might find a couple of really nice options, especially those that came onto the market within the last 5 years or so – when it comes to varmint-specific cartridges.

Two rounds that really stick out are the .224 Valkyrie and the 6.5 Grendel, though there are some larger grain weight options that can probably work from a depredation perspective rather than the historical concept of shooting prairie dogs.

And while that topic is fresh in your memory, “Varmint Hunting” as a concept, really has a broad range that it encompasses and it certainly includes depredation, which allows you to expand into larger grain weights that hit harder over the longer range and can cut wind properly.

Of course, wind cutting capabilities are in more than adequate supply when it comes to the .224 Valkyrie and the 6.5 Grendel, so there’s no worry there. But when shooting at animals greater than 55 to 75 lb, including feral hogs, and some other predators like large coyotes (which are probably at the lower end of that scale), you may want to bump up in caliber.

In that bump up of caliber you might be looking at the 6.8 SPC and the .300 Ham’r, both of which, have excellent results when you’re talking about getting into larger game or specializing in depression, where the hard-hitting, flat shooting, and moderate-range cartridges will give you peace of mind on every shot that a 22 caliber can’t quite offer.

Let’s have a look at some of these cartridges from a practical perspective before we get into the component parts that will make up a practical AR-15 varmint build.

One of the speed demons of the AR-15 world is the .224 Valkyrie, and you can expect an 88-grain projectile to be pushing 2700 ft per second velocity out of the muzzle with 1400 foot-pounds of energy and at 400 yards, you’re likely to see a drop of only about 24 inches.

When compared to off-the-shelf loads from the “near competitor”, the .223 Remington, the .224 Valkyrie makes a lot of sense when you need to reach out further than you can reach with the .223 Remington or the 5.56×45.

When you need extra grain weight, but need to maintain the velocity, the .224 Valkyrie is going to make probably the most sense in the entire spectrum of small caliber varmint cartridges designed to be optimized for the AR-15 platform.

While you can make a great argument for other 22 caliber options including some of the smaller, screaming fast options that usually come in bolt actions (like the .17WSM, the .204Ruger and the .220 Swift, etc.), if you need something on the AR15 platform that’s fast, still packs a punch and is made for varminting, you better be looking in the direction of the .224 Valkyrie at the very least.

The 6.5 Grendel is an obvious choice for those that want a bridge between perhaps a home defense gun and a varmint gun. Of for those who want to challenge the concept that one cannot build a varmint gun that’s capable of dispatching larger game.

The 6.5 Grendel is quite the cartridge and can do all three of these things very well. It even compares favorably in the moderate ranges to the 6.5 Creedmoor – a much larger cartridge.

And if you weren’t aware, the 6.5 Grendel was originally intended as a military specific and law enforcement skewed cartridge; not necessarily for hunting game.

You’re going to get about 450 yards plus of range with about 38 inches of drop at about 400 yards while shooting a 123-grain projectile with about 2,600 feet per second at the muzzle and 1800 foot-pounds of energy.

The 6.8 SPC was designed to compete favorably against the .308 Winchester.

That’s a vaunted cartridge to compete against, and the 6.8 SPC makes an excellent case. At 400 yd you can expect about a 31-inch drop while still holding a velocity of more than 1,700 feet per second with a plaid energy of about 700 foot-pounds of energy.

It was this intermediate terminality that positioned the 6.8 so well in the minds of military and law enforcement personnel.

The brainchild of Bill Wilson and his team at Wilson Combat, the 300 Ham’r was designed to outperform the .300 Blackout, as Wilson didn’t like the trajectory of the round even in supersonic format.

While the broader market hasn’t quite adopted it in full force, thanks to the happenings of the last couple of years and the difficulty in the supply chain.

Now that it’s a full-fledged option thanks to SAAMI, one can expect a 110-grain projectile with 2600 ft per second at the muzzle and 1650 foot-pounds of energy, with many other market available options surely soon to come.

One interesting point for the .300 Ham’r is that you’re looking at 350+ yards of effective range in a real-world sense, and this, out of a 16 and a quarter inch barrel.

The ballistics seem promising – and that might be the understatement of the year when it comes to the varmint spectrum – especially if premium cartridge makers start to experiment with the now standardized cartridge.

A caliber you might consider on the AR-15 platform is the 350 Legend. This is a straight walled cartridge that might make sense for game animals in that large size range, but only in the case of moderate or shorter ranges, up to about 250 yards or so. Beyond that point in distance, and beyond that size of animal, you may want to look at the other AR platform, the AR-10, or the 308 style AR for some solutions.

When building an AR-15 based varmint gun, finding the right component parts, especially in a market that is so crowded for manufacturers and options, may not always have your desired parts on your desired timeline.

Sometimes it’s quite hard to find the newest cool caliber and the components that helped it to achieve that status so plan accordingly and elongate your timeline so that you’re not settling for parts you don’t really want – especially if you’re trying to create a firearm that really will help you build your varmint legacy.

No one ever said “settling” was optimal. Furthermore, another consideration will be what you intend to do with your AR-15 other than varmint hunting.

Some shooters like to separate their guns by task and build one-off pieces that make the most sense for the given task. Others want to know that if they’re spending significant resources on a new rifle that they can bridge the gap between multiple use cases.

Other than a great optic, probably the biggest factor in accuracy for an AR-15 build is going to be the barrel and the surrounding architecture. That is: the component parts that stabilize that barrel to ensure that, once you’ve picked a proper cartridge mated nicely to the twist rate, you want to ensure that it is as solid as possible.

Stable shots are incredibly important. Having a good bipod, even if you must spend more for the bipod than you do for your optic, can make a lot of sense. Short of having a great bipod, if you have the inclination, you could bring bench rests or sandbags or other such accommodations. Some varmint hunting setups could easily allow for this type of setup.

In a pinch, the right sling could also give you significant advantages. If you’re building a dedicated and “practical” varmint gun however, practicality doesn’t necessarily start and end with budgetary concerns. Being able to take a shot in any given scenario quickly and confidently means that a bipod should be on your short list of items to explore when building said varmint gun.

In certain settings a tripod might make more sense and cost less.

These are excellent considerations when building a practical varmint hunting gun. Just the above three or four concepts will provide the bulk of the accuracy enhancement and fine-tuning you’ll need to put you in the right headspace and give you the type of accuracy and potency on target that most varmint hunters have come to expect as part of the deal.

Typically when looking to build a practical AR-15 rifle that can shine in the varmint space, one can go down either fork of the path, where the first option is to spend ridiculous sums of money and build a firearm capable of shooting ¼ minute of angle, OR  the second option, where one could take a relatively standard rifle and push it into the ¾ minute of angle realm, while saving a lot of money, which can help you to do a lot more hunting.

In the commonsense approach and practical ideology of this article: sometimes less is more, and while it’s always fun to be able to impress your friends at the range with quarter minute of angle accuracy and a $4,000 or $5,000 highly specialized firearm, sometimes it just makes sense to build an AR15 in the most practical way possible.

This method prioritizes utilizing the best practices to achieve the largest percentage of value gain while shooting and deprioritizes small incremental optimization in the varmint spectrum.

Take a look at our budget scope options in our article where we take a look at the best scopes for AR-15 under $100.

Hopefully this article has given you a solid base from which to jump off into your own varmint build for practical purposes.