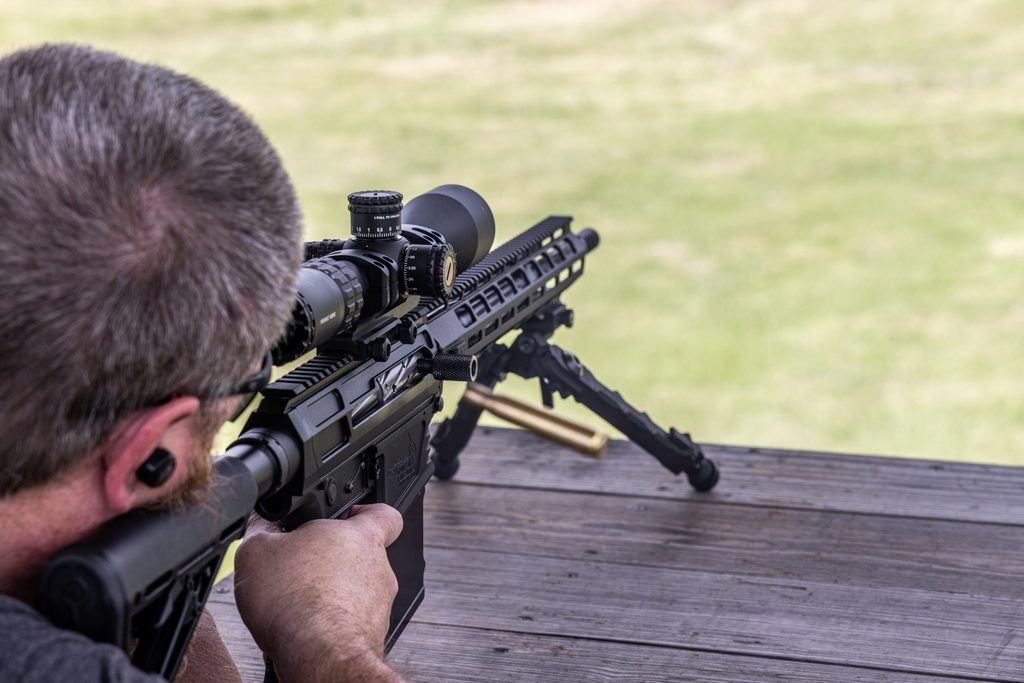 You’ve picked out your weapon of choice, most likely an AR-15 type rifle because it will cover a wide range of applications. You’ve considered the length of the AR pistol barrel or rifle barrel that you want your gun to have, so you can use it for medium to long range or shorter distance shots. But after all of that difficult debating and research, now it comes down to choosing the right scope magnification for your rifle scope that works with your set up.

It’s easy to get overwhelmed by the amount of information available to you when picking a new scope. There are thousands of models, hundreds of reticles, different focal planes, turret styles, parallax adjustments, and more. It can feel like you need a Ph.D. just to buy an optic.

Of all these different options and attributes, the most crucial to get right is the magnification range. A second focal plane scope can do most of what a first focal plane model can do, and vice versa.

The same goes for milliradian adjustments versus MOA, or Mil-dot versus grid reticles. Buy a scope with too much or too little magnification, though, and you’re going to have a bad time.

To determine what magnification range is best for your rifle, you need to first take a hard look at your use case.

The first and biggest determinant in choosing the best magnification for your rifle scope is the range at which you’ll be shooting. The farther out you want to be able to reach, the more magnification power you’ll need to be able to see the target. But how much power do you need, really?

You may have heard the guideline of a minimum of 1x for every 100 yards of distance. Using this rule of thumb, if you want to be able to reach out to 800 yards, you’d need a minimum of 8x magnification on the high end of your scope’s range of adjustment. It’s a decent enough guideline, but it really doesn’t give the full picture.

A talented marksman can certainly hit a target at 800 yards with 8x magnification, but those with less-than-perfect eyesight or less experience might struggle. For these types of users, more magnification is generally better.

Even with perfect eyesight, 1x for every hundred yards of distance is not always sufficient for all applications. If you’re looking to shoot precise groups to really test the accuracy of both your rifle and yourself, higher magnification will be beneficial. The higher the magnification, the more precise your image of the target will be, allowing you to put your crosshairs in the exact same location, shot after shot.

Still, not everyone is looking to punch small groups at long ranges; for some, simply ringing a steel gong is precise enough, which brings us to our next criterion.

The distance you’re going to be shooting at is obviously a big determinant of choosing the right scope magnification range for your scope, but what you’re shooting at matters almost as much. Shooting for groups is best done with as much magnification as possible, but that magnification may be superfluous for shooting steel, or may even work against you if you’re trying to hit a moving target.

High minimum magnification can make it more difficult to track moving targets, scan an area to locate your target before zooming in, or transition between targets.

If you’re shooting at paper and trying to wring every last drop of accuracy out of your long-range rig, you’ll want as much magnification as possible. In this use case, there are basically no drawbacks to a higher magnification, only benefits.

Acquisition time is a non-factor; after all, your target isn’t going anywhere.

On the other hand, if your shooting requires you to be able to transition between targets, such as in competitions, a lower minimum magnification may be helpful. This is especially true if shooting at steel targets in a competition setting where impacts are counted as hits or misses rather than being graded based on their distance from the center of the target.

In this case, the extra precision offered by high magnification has little benefit, but the improved transition time provided by a 3x or 4x minimum magnification can be a substantial boon.

For hunters, a low minimum magnification can be especially crucial. It’s much easier to scan an area with a lower magnification setting and then dial up when you need to look closer or take a shot than it is to try to use a high magnification the whole time.

A lower magnification makes it much easier to track a moving target as well, which is valuable for hunting predators or nuisance animals like wild hogs.

For these reasons, the really high magnification ranges like 6-24x, 5-25x, and 6-30x scopes tend to be relegated to benchrest and range rifles, while hunters and tactical shooters often opt for lower-powered, lighter scopes. Competition shooters go both ways, depending on their specific competition league and how much movement they’ll need to do with their rifles.

If your rifle is strictly for punching paper or ringing steel at the range, you probably won’t have to worry about weight. Prone or supported positions are the norm for this kind of shooting, and you won’t have to carry your rifle any farther than the distance from the parking lot to the firing line.

In this case, you shouldn’t have any trouble getting a stable, repeatable head position, so a tight eye box isn’t as big a deal. For this type of shooting, a higher magnification is usually appropriate.

On the other hand, activities like hunting or tactical shooting courses frequently require improvised or unsupported shooting positions. A lower magnification scope—something along the lines of a 2-10 or 3-15, depending on the range and types of targets being engaged—will usually be more forgiving and easier to use in these situations.

The last factor to choosing the right scope magnification is considering what your budget allows you to purchase.

Your budget doesn’t really have any effect on the amount of magnification you need; if you’re setting up a rifle for benchrest shooting, for example, there are appropriate high-power scopes available in every price range.

Where budget will really start to play a part is in the size of the differential between the minimum and maximum magnification of your scope. Scopes with larger ranges, where the maximum power is 6x or 8x or even 10x the minimum power are more expensive to manufacture and engineer, and so they command higher prices.

This comes into play when selecting the best magnification range for your rifle. A 1-10x may sound like a great do-all option, but at the same price point, a 2-10x may have brighter glass, a better reticle, or more durable construction.

For that reason, it’s important to consider your budget when deciding how much magnification you need. If you’re trying to avoid dropping a stack of cash on your next optic, consider going with a smaller magnification range to get the most bang for your buck.

By considering each of these factors both individually and as part of the larger picture, you can make an educated decision on just how much magnification you really need.

For example, a marksman looking for a new scope for a 6.5 Creedmoor to shoot at his local range out to 1200 yards can assume he needs a bare minimum of 12x magnification on the top end of his scope. He could opt for a 6-30x scope, giving him plenty of magnification to aim precisely at the very center of his targets at 1200 yards.

Let’s say he’s also a hunter, though, and wants to be able to use the same rifle for both tasks. In that case, a 6x minimum power is probably too high. He could opt for a high-end, high-dollar 2.5-20x power scope, or he could save a few dollars and go with a 3-15x instead.

Ultimately, it all comes down to your rifle, your shooting, and your preferences.