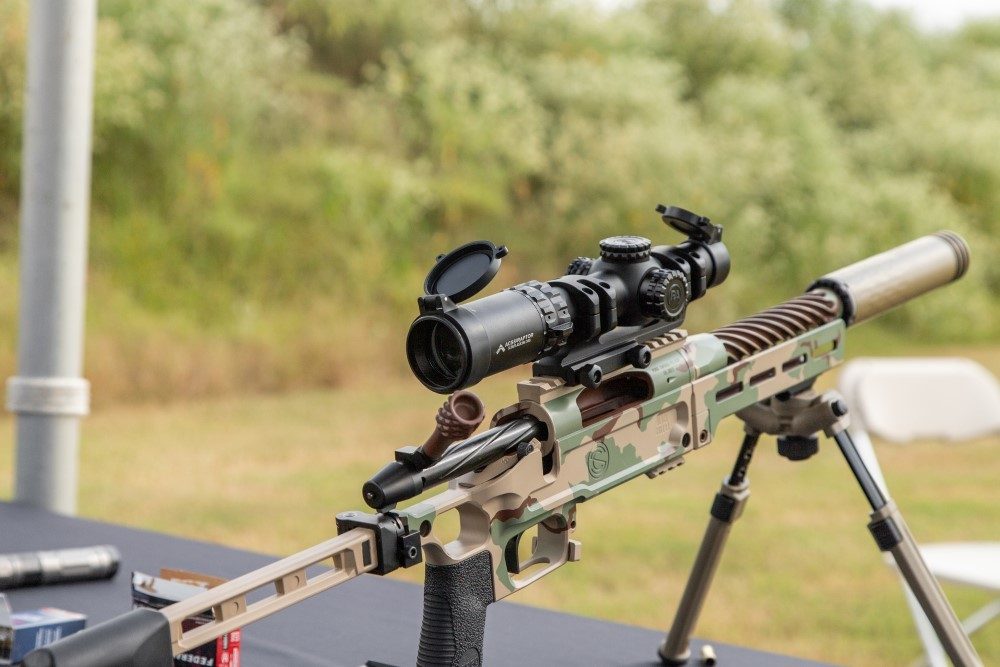 Historically, affordable suppressors and silencers are hard to come by unless you find the rare promo code or opt in for financing. Yet, suppressors sometimes referred to as silencers are used to make a gunshot sound less loud and reduce muzzle flash, so they add tremendous satisfaction to any shooting experience.

Luckily, over the past few years, several manufacturers have tried to come out with some more affordable options.

Here, we’re going to go through ten of the best affordable suppressors on the market today and make our recommendations on how we would use each of these suppressors if we were looking for one ourselves.

The Best Affordable Suppressors in .22LR

Starting off with one the lightest, and smallest suppressors on this is the Silencerco Warlock.

This suppressor, coming in at only three ounces, reduces the sound of your .22LR firearm to nearly hearing safe levels though, of course, we always recommend that you wear hearing and eye protection with every shot you take.

.22LR can be a somewhat dirty cartridge, which presents problems with suppressors that, by their nature, catch all of the fouling, gasses, and unburnt powder that comes out of the barrel of a gun.

We love, then, that the Warlock is user-serviceable with simple tools you already have at home. If this were ours, we’d put it on a .22LR pistol to make an awesome little range plinker.

It would also be a good choice for a .22 take-down rifle paired with a good 22 rifle scope that you plan to take backpacking or small game hunting, as you’ll hardly notice the extra weight in your bag or on the end of the muzzle.

Odin Works often pushes the boundaries in terms of innovative designs, and this one is no different. This suppressor is modular, meaning you can change the length and the performance to suit your needs.

On a .22 pistol, we’d probably run this suppressor as short as possible as .22 isn’t that loud to begin with, and keeping the weight down in a pistol is always a major consideration.

On a rifle, however, we’d assemble the full length of this .22LR suppressor to maximize performance while still being a relatively light overall package.

This offering by Griffin Armament would likely be one of the most effective .22 silencers on the market today.

The Resistance makes use of neoprene baffles, which are replaceable discs that you place in the suppressor to contain nearly off the gas and flash from the first few shots.

We’d use this in the context of small game hunting if being quiet was an absolute priority.

This little .22 suppressor packs in a lot of technology at a reasonable price. Aside from being made out of stainless steel and titanium, this model is also a flow-through design, meaning it doesn’t mess with gas systems so much.

This would be a great companion to a semi-automatic .22LR, and nowadays many manufacturers make barrels that come threaded in this exact pitch.

The Ruger 10/22 Takedown is one of the most popular firearms in America, and for good reason: it’s affordable, shoots well, and has a ton of aftermarket accessories made for it like this integrally suppressed barrel.

If you’re fairly handy, you’d have no trouble installing this barrel yourself, making this a compelling option for folks who have a 10/22 and are trying to remake it into a seriously cool firearm.

The Best Affordable Suppressors in 5.56

As far as one of the best inexpensive suppressors, Yankee Hill Machine has been one of the better manufacturers for some time now, and some of their designs are getting seriously cool.

This one is meant to be used with their Phantom Muzzle brake, and, with it, still only weighs a little under nine ounces.

Aside from the substantial noise reduction, the excellent feature here is that it’s quick-detach and leaves you with a good muzzle break even with the can off.

We’d happily use this, especially on an AR pistol where we wanted to have a good muzzle brake on it all the time to tame the sometimes unpleasant gas venting from shorter barreled ARs.

Another compelling offer from Radical Firearms, this direct thread suppressor, made of stainless steel, promises good performance and a simple design at a relatively good price. In case you haven’t noticed Radical Firearms makes some of the best affordable suppressors on the market today.

Since it’s direct thread, we might want to use this one on a bolt action rifle, like a Ruger American, that we intended to leave suppressed most of the time for hunting purposes.

The Best Affordable Suppressors in Other Calibers

Radical Firearms, in the last few years, has expanded its line of affordable, well-made products to suppressors.

Here we want to include their direct thread 7.62mm suppressor that’s direct threaded in a common 5/8×24 pitch, making it widely compatible with guns made in the West.

We think this would make an awesome suppressor for a FAL or g3 project if we had the barrel already threaded, and we’d probably shoot as much ammo as we could through it considering it does also come with a lifetime warranty.

Ammo pricing notwithstanding, we’d love to try that warranty out!

Another offering by SilencerCo, this one is meant for .45 ACP firearms, and if you already have one with a threaded barrel, this affordable can well net you a substantial reduction in decibels, while being able to be cleaned without taking it to a gunsmith, which we always appreciate.

Were it up to us, we’d put this on a 1911 style firearm running subsonic ammo just to see how quiet we could get it while still maintaining reliable function.

Effectively the bigger brother to the Tubo K, this suppressor is also meant to work in a quick-detach configuration along with the Phantom series of muzzle brakes.

We think this would be an excellent suppressor to put on a short FAL or Galil in 7.62, as the addition of a high-quality and effective muzzle brake makes this a value proposition that will let you tame the recoil better even when you’re not using the suppressor itself.

What Is The Best Pistol Cleaning Kit?

Previous Post Why Is 6.5 Creedmoor Good for Long Range? Next Post Best Scout Scope For the Money in 2022 – Top Picks By Gun Enthusiast